This Rann of Kutch Itinerary will blow your mind away.

Our 4 Day Rann of Kutch itinerary is interesting , exciting , fun and will be the perfect introduction to this amazing region. Let your ultimate desert adventure begin. 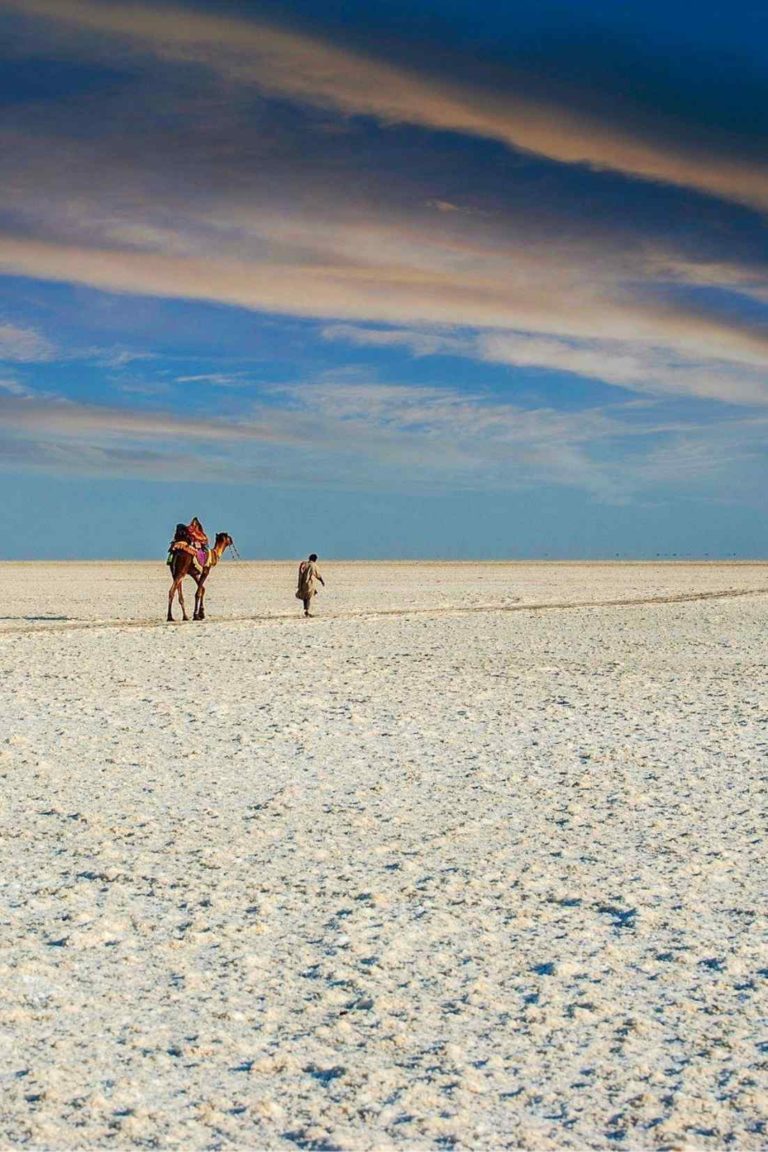 The Rann of Kutch, also known as the Great Rann is a remarkable place. This is India’s Wild West – one of the world’s largest salt desert, this vast and arid expanse of nothingness characterized by the enormous stretches of packed white salt is home to a jigsaw of tribal groups that provide a dash of color in this harsh landscape  and beckon travelers to explore.

With some of the finest craftsmen producing India’s best handicraft and textiles, healthy and organic regional cuisine , interesting history and culture, all of it couple with the natural and rugged beauty of the great Rann , we promise this will be an epic travel experience.

With direct rail and air access from all the major cities across India, this is your gateway to the region. We recommend staying for a night and exploring this chaotic town, which in spite of the mammoth earthquake of 2001, has rebuilt itself determinedly and welcomes visitors with geniune warmth.

First step of your desert adventure will be getting to know the town and its people. The historic town of Bhuj is centred around the large Hamisar Lake that adjoins the old walled city and palace, and a web of narrow, bustling streets that form a colorful bazaar.

Start with the Darbargadh Palace complex that lies at the heart of the old walled city- The complex comprises the original 16th century Aaina Mahal – an enchanting structure featuring carved sandstone jharokhas on its exterior and a glittering mirrored interior, and the Italian-gothic Prag Mahal palace which includes a 45ft clock tower from which you can view the entire city of Bhuj.

The Narrow lanes of Shroff Bazaar are a Shoppers Delight

Next you can wander through the archway at the foot of Darbargadh’s palace complex and immediately enter Bhuj’s bustling market scene – The Shroff Bazaar, here you will find merchants offer vintage textiles such as embroidered patches and blankets as well as antique furniture and trinkets. Explore the narrow side streets and you’ll find beautiful Kutchi shawls of export quality which make for a great souvenir to take back home.

Finally you can savour a food tour to explore the delicacies of the region, begin with Saifee’s – Bhuj’s institutionalised ice-cream parlour; Farsan Dunia – a lovely bakehouse selling traditional sweet and savoury snacks such as pakwan, shankar pala, fafada and namkeen, and the original Khavda, Bhuj’s famous sweet-house, selling their ‘melt-in-the-mouth’ Mesur sweetmeat and even a sugar-free Khajurpak.

End the day with a lovely stay at the Bhuj House. Our top stay recommendation for any Rann of Kutch itinerary.

Day 02 - Into the Wilderness Great Rann

The vast white nothingness of the Great Rann is a spectacle to behold - With no mountains , or lakes , or even flickering lights dotting the horizon , just blankets of white merging into each other , the glorious delusions of Rann will leave you spell bound.

Today we will drive to the Great Rann – With no mountains , or lakes , or even flickering lights dotting the horizon , just blankets of white merging into each other , the glorious delusions of Rann will leave you spell bound.

This is the topmost place to visit on our Rann of Kutch itinerary.

All living spaces at Shaam E Sarhad are designed to showcase local talent and are decorated with local handicrafts.

Our textiles tour takes you through the local villages where you have a chance to interact and learn from the local communities and help their economy. A perfect example of sustainable travel on our Rann of Kutch itinerary.

After a final early morning foray into the eerie mists of the White Rann we will devote time to exploring the heritage and culture of the wonderful region.

Exquisite, intricate, vibrant and shimmering are just some of the descriptions that one uses to describe the rich abundance of Kutchi craftwork, in particular its textiles.

But it’s not just the sight and feel of the textiles that makes Kutch such a special destination; it is the experience of observing traditional artisans – including National Award Winners – at work in their homes and villages as they have done for generations, and even having a go yourself on our Rann of Kutch itinerary is special.

Explore the Ancient Ajrakh Block Printing – involving printing intricately carved wood-blocks on to fabric, using dyes traditionally made from natural sources, such as pomegranate, indigo and iron. Or learn Bandhini – technique whereby tiny pinches of a fabric are tightly bound in fine thread to resist the dye. Perhaps you would like to explore Kutchi Embroidery – some of the finest that India produces. Intricate stitches, often incorporating small mirrors are typical of most styles, although each style is uniquely representative of different tribal communities.

Overnight at the Kutch Safari Lodge – an ideal stay with a serene view overlooking a water body, giving a chance to connect with nature

Kutch Safari Lodge is ideal for a relaxing stay after  whirlwind tour of the region.

The Living and Learning Design Centre (LLDC) a pioneering effort to preserve, revitalize, and promote the glorious craft heritage of Kutch. Dedicated to the craftspeople of Kutch, it is a multi-dimensional crafts education and resource centre that trains and supports craftspeople in traditional crafts so that they are capable of earning a dignified livelihood.

Before leaving , you must explore LLDC. Dedicated to the craftspeople of Kutch, it is a multi-dimensional crafts education and resource centre that trains and supports craftspeople in traditional crafts so that they are capable of earning a dignified livelihood.

This 4 day plan be your perfect introduction to Kutch Region and while we have designed this itinerary to fit your plans for an extended weekend, keep in mind that there is much more to explore in the region if you are not pressed for time.

Want to be Inspired – Check out our Top Experiences in Madagascar.

Global Journeys runs bespoke tours to the region, including visits to surrounding handicraft villages and are actively involved in rural and responsible tourism in the area. Going on a guided tour with us takes the hassle out of planning and sightseeing.

This site uses Akismet to reduce spam. Learn how your comment data is processed.

This may be a good place to introduce yourself and your site or include some credits.